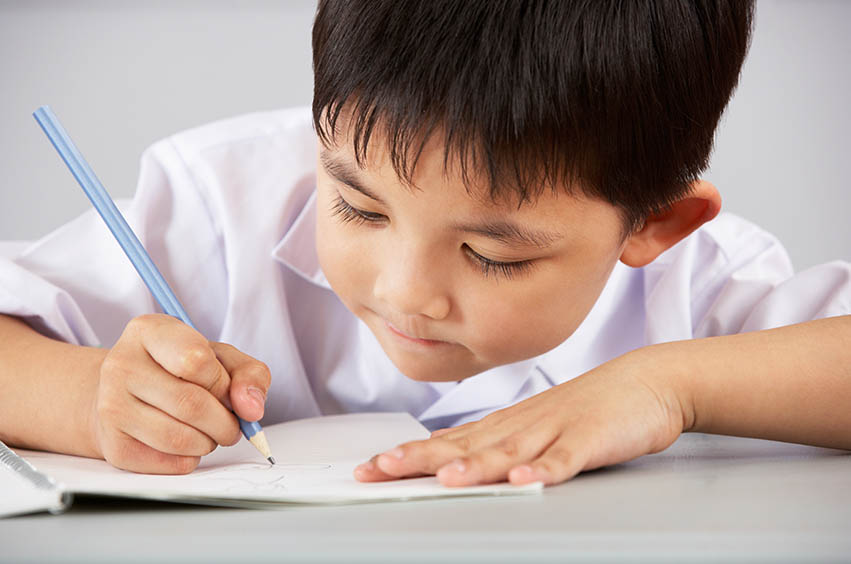 Unlike most preschools phonetic sounds are given first because these are the sounds he or she learned in words. For example, a child can hear the letter At@ at the beginning of the word Atop.@ He or she cannot hear the alphabetical sound of Ak.@ The teacher introduces the consonants with the sandpaper letters. For example, when presenting the letter Am,@ the teacher makes a humming sound rather than saying Am.@ In the first introduction of the vowels, the teacher gives the short vowels sounds such as those at the beginning of the words, apple, egg, inset, ostrich, and umbrella. As soon as the child learns a few vowels and consonants, he or she is ready to begin constructing three letter words which have a short vowel sound.

After the child has learned the Sandpaper Letters, the child is ready to make words with the large Movable Alphabet. For this activity, the teacher prepares a box of toys representing three letter words with the short vowel sound, such as a bed, a lid, a fan, and a cup. First the child selects an object, such as the bed, and says the name of it very slowly so the child can hear each sound--b...e...d. The child then selects the letter to represent the first sound and places it beside the object on a mat.

To build the motor skills to write with a pencil the child in a Montessori classroom learns to control a pencil by filling in outlines, an activity which does not weary the child because he or she enjoys it. To make the outline, the child uses equipment known as the Metal Insets. Each inset represents a different geometric shape. After selecting a figure and tracing it on paper, the child fills in the outline with a colored pencil of their own choosing.

After the child has worked for a while with the Metal Insets and the Sandpaper Letters, a day comes when the child realizes he or she is able to make words with a pencil. Montessori called this phenomenon the “explosion into writing” (Montessori, 1967, p. 84).

Dr. Montessori always pointed out that the young child has a natural sensitivity for language development which follows closely on the years when he or she learns to speak his or her native language (Montessori, 1966). At three, four and five years of age the child has a unique fascination for words, both printed and spoken. This fascination often enables the child to begin reading and writing before the age at which it is traditionally taught.

Reading instruction can begin on the day when the child wants to know what a word says or when he or she shows interest in using the Sandpaper Letters. Writing or the construction of words with movable letters, nearly always precedes reading in a Montessori environment.

A phonogram is a special combination of two or more letters which produces a single sound different from the regular sequence of sounds of these letters. Examples of phonograms are oy in toy, ch in chin, and tion in action. Two different colored Movable Alphabets are used for building words containing phonograms. The particular phonogram which the child is learning is constructed in a color different from the rest of the word. For example, when learning sh, the child can make words like ship, shell and fish. Each time the teacher uses the sh in one color, such as red and the remainder of the word in another color, such as black. The teacher then uses two colors to print small phonogram booklets for the children to read. Each booklet illustrates one particular phonogram and has a different word printed on each page. For example, the booklet illustrating the phonogram oa might have coat on the first page, boat on the second page, road on the third page and so forth. On each page, the phonogram oa is emphasized by a color different from the rest of the word.

In conclusion, the fascination children have with words at the ages of three, four and five often enables the child to begin reading and writing before the age at which it is taught in traditionally preschools or child care. At Arbor View Montessori preparation the child has received learning with Metal Insets, Sandpaper Letters, and the Movable Alphabet prepares for the time when the child realizes he or she is able to make words, which precedes potential for phenomenal development in language and the “explosion into writing” as Maria Montessori has termed it.