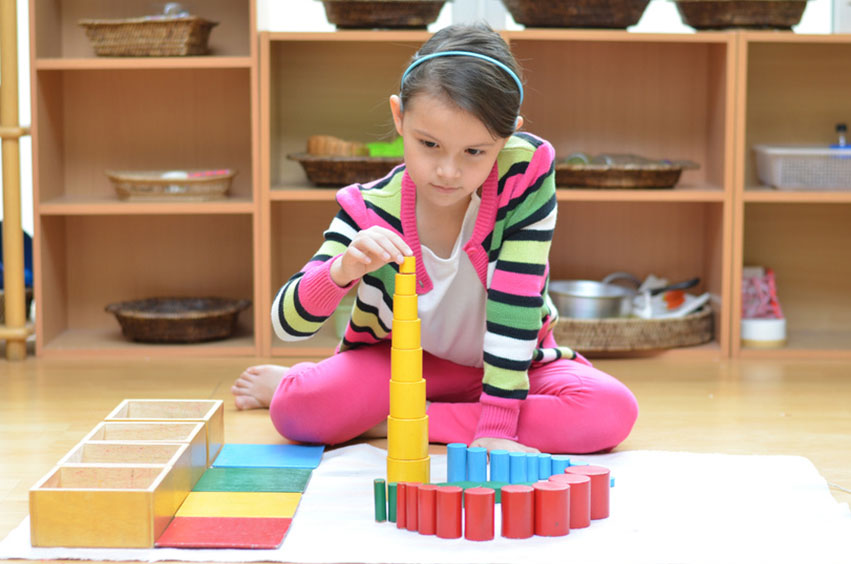 At Arbor View Montessori we use Sensorial Materials in the Montessori classroom that increases children’s awareness help the child’s impression, which brings the child order and knowledge; and helps him or her to become aware of details by offering contrasted sensations. An example would be the difference between red and blue, and then variously graded sensations, such as many different shades of blue. The material enables the child to know what is red, what is blue, and then to understand the abstraction of blueness and finally the abstraction of color itself.

The Montessori Sensorial Materials help the child to distinguish, to categorize, and to relate new information to what he or she already knows. Dr. Montessori believed that this process is the beginning of conscious knowledge. It is brought about by the intelligence working in a concentrated way on the impressions given by the senses. For instance, each of the sensorial materials isolates one defining quality such as color, weight, shape, texture, size, sound, smell, etc.

Montessori educational materials emphasize this one particular quality by eliminating or minimizing other differences. Dr. Maria Montessori called this material, "materialized abstractions," because each piece isolates whatever it is trying to bring it to the child’s attention. Here in another example; sound boxes are all the same size, same shape, same color, and same texture; they differ only in the sounds which are made when the child shakes them. We make it our responsibility at Arbor View Montessori Preschool and child care to build a foundation of the child’s intellectual and physical abilities by using exercises graded by their degree of difficulty.

Only when this indirect preparation has taken place, when the child has mastered all the component parts of an exercise, can the child expertly master the exercise and move on to the next activity. Therefore, not only the right material, but also the right time in the child’s development has to be chosen.

Here are some examples of Montessori Material: